Despite the fact that we are now in the year 2023, I’ll ask you, dear audience, to travel back in time with me to December 2022. I had the pleasure of traveling once again to the Bay Area Kei‘s final event of the year, the Holiday Pop Up. I thoroughly enjoyed myself at this shopping and social event! The pop up offered a mix of structured and free form opportunities for socializing and shopping with a mix of all kinds of j-fashion beyond just my personal favorite, lolita fashion.

Full disclosure, as the host of one of the events at Bay Area Kei’s Holiday Pop-up, I was offered some perks to the event, including complimentary access to the paid social events. While it’s a little hard for me to be objective about some of the events, I still feel like I can give some insight into the event! 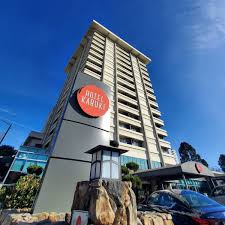 The Holiday Pop-up was held in the same venue as last year, the beautiful Hotel Kabuki in San Francisco’s Japantown. I stayed at the hotel again, which was an all around great experience. Japantown is a fun place to explore, with plenty of restaurants, specialty stores, boutiques, and at least two karaoke bars. Last year, the event was a two day shopping event that was held in one of the smaller ballrooms. This year, BAK had a ballroom for the vendors, a smaller conference room for the artists, plus a ballroom downstairs that served as a crafting space, game room, and tea room!

Well before the event, BAK’s team issued guidelines for COVID. They required everyone attending to wear a mask and show proof of vaccination. Given that the event was indoors and in the winter, this seemed like a prudent set of guidelines to ensure that all attendees would be minimizing their potential exposure to any illness as much as possible.

Friday night, the sole event was the community swap meet. Sellers purchased swap meet tables ahead of time but admission was free for buyers.  The room was packed with j-fashion and shoppers. I’ll admit, I was a little overwhelmed! I was pleasantly surprised by the amount of classic items I found for sale, and walked away with an Innocent World JSK and two brooches. I also had a chance to say hi to some friends visiting for the evening.

Saturday was the only day for shopping the vendors’ and artists’ alley, which were set up in two adjacent rooms. The doors opened to the general public at noon and closed at 6 pm. BAK also offered VIP shopping an hour before the general public for $20. As a host, I was given complimentary access. Given that some designers, like Neant Glass, regularly sell out during their drops, it seems like it might have been worth it if there was an artist that you really wanted to buy from.

Ultimately, I don’t think that there was an item that would have sold out if I had gone during the normal hours, but it was great to be able to browse without the pressure of a crowd. While I didn’t purchase any main pieces, I still managed to buy quite a few items, including a hat from Romantic Serenade, a brooch and matching ring from Neant Glass, a headdress from Molly Moonflower, and some Christmas presents.

Later in the day, the “Crafternoon Activities” opened their doors. Crafternoon was part of the “Social Ticket”, for $20.  There were 4 rotating stations, with talented instructors who provided all the materials for their crafts. This included rosette making, cross stitch, and crochet, as well as chill coloring station. While I didn’t make it to all the crafting stations, I was impressed at welcoming everyone was. If you didn’t know anyone at the event, sitting around a table with other people for 45 minutes offered a great opportunity to chat and get to acquainted.

Of course, it was not necessary to pay for opportunities to socialize. The Hotel Kabuki’s spacious lobby always had lounges open for people to relax and chat, and on Saturday it was always clear who was there for the j-fashion event. Nestled in the heart of Japantown, Hotel Kabuki was also directly next to an indoor mall full of restaurants, boutiques, and a Japanese bookstore. Rainy weather meant dashing across the Peace Plaza to reach it, but once you were inside it was easy to just spend time in the mall. Even though BAK swears the pop up is not a convention, the whole weekend had the feel of a convention. I ran into strangers and friends alike dressed in their frills, and it was easy to strike up conversations with people about their coordinates, purchases, and weekends.

After a break for dinner, the game night began at 7:00 PM. The BAK crew reached out to me prior to the event and asked if I’d be willing to host it, which wasn’t hard to say yes too! Because I flew, I had to be a little conscious of space in my luggage, so I opted for party games that were easy to learn, quick to play, and packed up small. I was a little nervous about being “game master” for a larger group because not everyone’s tastes are the same, but luckily people were happy to pick up and play games they already knew. People also brought their own games and taught attendees how to play.

In retrospect, I wish that I had reviewed the rules for some of the games I brought but hadn’t played recently, especially Sushi Go, which I just completely forgot how to play. Game night wrapped up around 10:15, but there were still a group of around 10 people who recessed to the lobby to continue chatting about the high and lows of board game night.

Sunday was the final day of the event which culminated in a tea party. This tea party was held in the Hotel Kabuki and had the most unusual fare I’ve ever seen at a tea party: sushi and sliders! Tables were set with approximately 10 place settings and everyone was seated as they arrived, so my table was full of some people I knew, some people I’d met over the weekend, and some people who I’d never met! Tables were set up with coloring pages (from artist Yumi Yumi Illustration) and icebreakers to get everyone talking (our table had no problem with that!)

The tea party also featured a photo op outside the dining room with a polaroid and digital camera, a coordinate contest, and a Secret Santa. The coordinate contest and Secret Santa gift exchange were optional. I signed up for the gift exchange but had to leave the tea party early, so I wasn’t there for the actual exchange. Santa, if you’re out there, please know that I love my board games!

I had a wonderful time at this event. Whether I was chatting with j-fashion fans in the elevator or running a game of Sushi Go badly, everyone was warm and welcoming. Sadly, this is the last year for the Holiday Pop-Up. Happily, the event will become Ursa Major, a new bear themed event put on by the Bay Area Kei.

If you enjoy my writing, please consider supporting me on Kofi!

Hi! I noticed you're using an adblocker. Please considering white listing this site. Ad revenue helps pay for hosting costs so I can keep this website up and running. Thank you!